This article will explain this theoretical approach, proof of concept, and how these improvements can be ultimately achieved with ceramic heat sinks. Computational fluid dynamics (CFD) based simulation processes support thermal optimization and product process design.

It is understandable that a light-emitting diode (LED) is prevented from becoming an ideal light source due to the problem of heat generation. We pay a lot of attention to the heat sink, but we don't think much about the layers and barriers between the LED and the heat sink surface.

In addition to simplifying system implementation, changes in concepts and materials can significantly improve thermal management capabilities and reliability. The use of ceramics as a heat sink, circuit carrier, and part of product design requires not only new ideas, but also the willingness to overcome traditional models.

As we all know, LED is an energy-efficient light source, and because of its small size, it is loved by designers. But they can only be called "small" only when they are not involved in thermal management. Although the operating temperature of an incandescent light source is as high as 2500 ?° C, the LED light source temperature is much lower. Therefore, many designers finally realized that heat dissipation is a problem that cannot be ignored. Although the LED still heats up, its temperature is relatively low, so this won't be a big problem. However, based on semiconductor device LEDs, the operating temperature should be below 100 ?°C.

According to the law of conservation of energy, heat (energy) must be transmitted to a nearby area. The LED can only operate between an ambient temperature of 25 ?° C and a maximum temperature of 100 ?° C with a temperature difference of only 75 ?° C. Therefore, a large heat dissipation surface and very efficient thermal management are required.

As shown in Figure 1, Group 1 is the LED itself and is still largely untouchable. The center position is the LED die and a heat sink copper strip that connects the die to the bottom of the LED. From a thermal point of view, the ideal solution is to bond the LED die directly to the heat sink. Due to mass production, this concept is not commercially viable. We see LEDs as a standardized "catalog" product that cannot be changed. It is a black box. 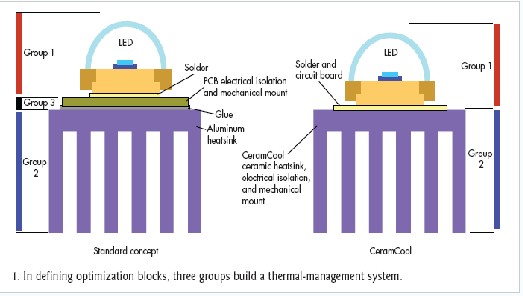