Sensors are the key to smart city construction 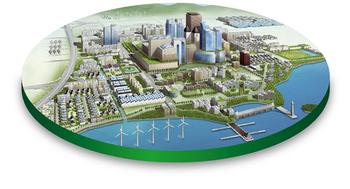 At present, it is generally believed that sensors are the key to the construction of smart cities.

Han Guosong Island <br> <br> Korea has been at the forefront of new technology countries, the country has called the world's fastest consumer Internet, its culture also recognized the application of new technologies. Therefore, it is not surprising that South Korea has become one of the first countries to try to build smart cities by exploiting the potential of the Internet. In 2001, Korea took the lead in establishing a high-tech city where people can live in the future through the reclamation of the sea: Songdo (Songdo). In Songdo, power facilities that are fully connected to the network will not only provide city managers with information on the current electricity usage, but they will also help local residents control their electricity usage. Traffic information sensors have also been pre-positioned on public roads in Songdo so as to provide the city's traffic departments with specific information on traffic conditions and allow traffic managers to intelligently reset traffic lights to reduce the incidence of traffic jams and traffic accidents. At the same time, it can optimize the distribution of traffic and people flow. These "smart roads" are connected to the central control room through the network and can play an early warning role before the earthquake.

Santander, Spain
Santander, Spain is a medium-sized town. In order to reduce air and noise pollution, Santander has begun to seek the help of technology and become one of the pilot cities for the deployment of large-scale sensors. By launching the "Smart Santander" project, the city has already deployed about 10,000 electronic surveillance equipment. Each device includes two radio transceivers to communicate with other devices, GPS and sensors, and to monitor urban CO2 emissions, noise, temperature, ambient light, and even parking spaces in a particular area. Each monitoring device communicates information in real time over the Internet so that drivers can find the next suitable parking lot via mobile applications or smart signals.

<br> <br> American city group in the United States, several municipalities have begun to install new sensors within the city sewer systems and waterways, which allow them to save a lot of money. For example, in South Bend, Indiana, a monitoring sensor device provided by IBM is installed, which can aggregate data collected from different government departments and then convert this data into useful information. This reduced the incidence of sewer overflow incidents in South Bend City by 23% and completely eliminated the sewer blockage. South Bend City expects to be able to recover the cost of installing new technology equipment in less than two years. In Miami-Dade County, Florida, municipalities said using smart sensors can help them repair tap water accidents faster. They expect that this will save $1 million in annual funding and reduce water consumption by 20%.

In the current wave of global smart city construction, national builders are increasingly aware that only a very large number of data acquisition devices, ie more sensors, can be deployed in cities to meet the needs of smart city construction. However, at the Smart City Forum held on September 10, the participating experts expressed this view: a€?Building smart cities does not put more sensors and collect more data, but breaks down information islands and reintegrates information resources. Before the appearance of the Internet of Things, various parts of the city, such as medical information, traffic information, environmental protection information, and housing information, were isolated from each other and were chimney-shaped and did not form a shared one. a€?The arrival of the Internet of Things era has made it possible to build a smart city.a€? Oracle experts said that to build a smart city, it is necessary to reintegrate the information of various parts of the city and share relevant information.

From this perspective, building a smart city must first break the a€?information islanda€?, realize the sharing of information and data, and manage it in a unified manner so that the data can truly serve the managers. Particular emphasis should be placed on breaking the industry's fragmented, closed information architecture and highlighting the overall effectiveness of informationization. "Does not break the interests of the department, even if put more sensors, still can not solve the problem of information sharing." Experts believe that. Taking the San Francisco Smart Parking System in the United States as an example, the government will re-allocate parking spaces by sharing information on all parking spaces in the city, implement flexible charging, and make city-wide parking spaces into APP software for downloading by citizens. For the driver, download this software, you can find parking spaces in various locations nearby and understand the charge information. At the same time, the construction of smart cities should begin with top-level design. The government should make appropriate disclosures of non-private information for sharing among citizens.

For example, New York launched the 311 citizen phone number, which is the citizen's comprehensive service hotline. It integrates the original hotlines of all smart departments in the city and implements the governmenta€?s a€?No.1 Foreigna€? policy. It handles public consultations, complaints, requests for assistance, reports, opinions, and suggestions 24 hours a day. In this way, it has completely resolved the situation in which many of the original hotlines ripped and pushed each other.