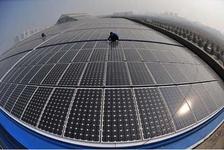 In the near future, relevant departments will clarify the 50 percent preferential policy for value-added tax for photovoltaic power plant projects. Analysts said that this will be another good thing for the photovoltaic industry after China and the EU reach an understanding on the photovoltaic trade dispute.

According to the notice issued by the Ministry of Finance and the State Administration of Taxation on the comprehensive utilization of resources and other product's value-added tax policies issued in 2008, using wind-generated electricity, VAT shall be exempted by a policy of 50%. At the end of last year, the executive meeting of the State Council made it clear that it is necessary to improve the mechanism of the central government's financial support for the development of photovoltaics, and the photovoltaic power station project implements the same VAT preferential policies as wind power.

Recently, the photovoltaic industry has enjoyed good development. First, the State Council issued a number of opinions on promoting the healthy development of the photovoltaic industry. From 2013 to 2015, the annual domestic average installed capacity of photovoltaic power generation is about 10 million kilowatts. By 2015, the total installed capacity has reached 3,500. Million kilowatts or more. The opinions also put forward corresponding requirements from the aspects of improving electricity prices and subsidy policies, increasing financial and taxation support, and strengthening the construction of distribution networks. At the end of last month, the Ministry of Commerce stated that China and the EU have reached a price commitment on China's importation of trade disputes on photovoltaic products in Europe. It is understood that this time the price commitment reflects the wishes of the vast majority of Chinese companies, so that China's photovoltaic products in the negotiated trade agreement between the two sides, continue to export to the EU, and maintain a reasonable market share.