September 03 14:03:59, 2019
[High-tech LED News] OSRAM Opto Semiconductors R&D Lab has set a new light efficiency record for red high-power LEDs with a photoelectric conversion efficiency of 61%. The 1 mm2 chip in the experimental package has an emission wavelength of 609 nm (??-dom). When the operating current is 40 mA, the measured light efficiency reaches 201 lm/W, while at 350 mA typical operating current, the luminous efficiency is up to 168. Lm/W. This means that even at high power, more than half of the electrical energy will be converted into light energy. 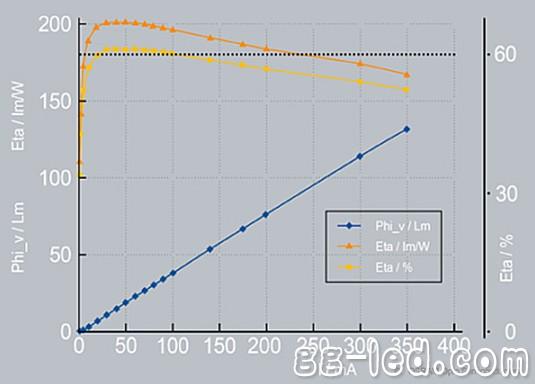 Osram says the significant increase in light output is due to the use of the company's latest generation of thin-film technology, and its LED color mixing system, such as the Brilliant Mix, represents the latest developments and is ideally suited for general lighting applications. These systems produce a variety of white light, whether warm white, white or white. The overall performance of the system is almost equivalent to the best performance that each component can achieve.

Osram refers to this new high-power red LED that is expected to further improve the quality of light, especially warm white light, at lower power consumption. This not only facilitates the use of color mixing concepts, but also benefits all applications that use high-efficiency red LEDs in general lighting, projection and automotive applications.

The LED R&D team at OSRAM's headquarters in Germany pointed out that the results of the project can be extended to all wavelengths in InGaAlP chip technology, so LED light effects of these colors are expected to increase significantly, even at 660 nm wavelengths required in areas such as factory lighting. is also like this.

The LED R&D team at OSRAM's headquarters in Germany is expected to introduce the results of this R&D project across the entire wavelength range into the production system within a year or so.