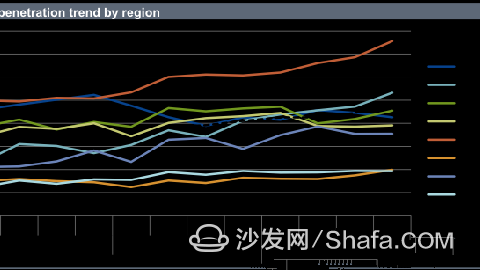 Paul Gray, chief analyst at IHS Technology, said: "More and more consumers are realizing that smart features are very important. The market dynamics have evolved from the self-sufficient demands that gave birth to the endogenous Internet streaming capabilities."
In 2015, more than three quarters of Chinaa€?s shipment TVs had smart features, and the penetration rate of smart TVs in North America soared from 36% to 48%. IHS Technology research points out that the popularity of Netflix and other services is strengthening North American demand.

Other regions are also mixed. Despite the downturn in the television market, smart TV shipments in Latin America continue to grow strongly. In order to promote digital conversion in Mexico and increase the funding of basic televisions, the penetration of smart TVs has declined. In addition, in the fourth quarter of 2015, more than half of all shipments in Latin America have smart features.

Japan and Europe seem to enter a period of stagnation. In 2015, smart TV shipments declined slightly. This was largely due to the end of large-scale promotion activities of TV brand manufacturers and the lack of quality local content.

Gray said: "Smart TVs will continue to grow slowly. China is the main engine for smart TV growth, but there is limited room for growth. Other developed markets are also becoming increasingly saturated, and there are still problems with insufficient broadband connectivity in emerging regions."