At present, there are many international communication protocols for LED lighting intelligent control systems, including ZigBee, DALI, Lonworks, etc., together with the IoT's light sensing, temperature control, gas sensing and other sensing components can collect environmental information very well, through mobile phones, Wireless, intelligent control of LED luminaires can be achieved with computers, tablets, remote controls or panels.

DALI is an international standard for digital lighting control, the full name of the digital addressable interface standard. It enables up to 64 digital dimming ballasts with one4all interface to be individually addressed on a single line, assigned to 16 groups and programmed for 16 lighting scenes, in conjunction with the simplest smart sensors. Energy saving effect can be up to 80% or more.

The reporter learned from Du Yanxi, R&D director of Ledia, that their intelligent control system chose independent controllers for remote control, all using DALI standards. a€?As long as the digital interface is added to the periphery, the control connection between the LED luminaire and the mobile phone and tablet terminal can be realized.a€?

In Du Yanxi's view, as long as the content of the DALI standard is understood, it is not too difficult for domestic manufacturers to master the wireless intelligent control of LED lighting.

ZigBee wireless transmission distance can reach 3,000 meters in the case of barrier-free, but in most cities, because buildings will hinder signal transmission, accompanied by signal interference such as reflection, it is limited in outdoor applications. At present, ZigBee is mainly used indoors, and its wireless signal transmission can generally be about 30 meters.

Tang Wei, deputy manager of the marketing department of Murata Electronics Trading (Shenzhen) Co., Ltd., said that the ZigBee system produced by the company can achieve wireless transmission of 30-50 meters. At the same time, the transmission distance can be increased by adding a signal amplifier or other special signal processing. In terms of control effect, Tang Wei said that as long as the demand can be put forward, the company can integrate the gateway into the gateway to realize the personalized operation of the scene mode and the terminal.

Another wireless transmission mode is Lonworks, also known as fieldbus, which is a low-level data communication network in the field of automation. Simply put, digital communication is used to replace the transmission of traditional analog signals and ordinary switching signals.

Kara offers a wide range of illuminated and non-illuminated Rocker Switches.Ranging from 1 to 6 poles,4VA to 30 amp,with many styles of  colors and functions,especially the switches with High-Current used very widely in the welding machines. Certifications include UL, CSA, TUV, CE, and more. Kara Rocker Switches include the KR1-Series abd KR2- Series based on different size of the panel cut-out. 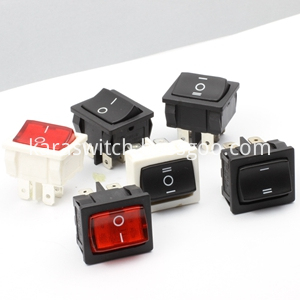