For lighting applications, MCUs dedicated to Power Electronics products can even effectively control the power supply of lamps, make them cost-effective, and perform lighting control and communication. Like the trend of many modern electronic products, the switch to digital control has opened up more flexible spaces and brought a new level of intelligent functions and differences to lighting products.

In addition, entertainment applications include high-end displays and mood lighting. Complete intensity control and consistent color quality are very important. For industry-standard communication protocols such as Digital Addressable Lighting Interface (DALI) or DMX-512, remote connection and support are also very important. Outdoors and infrastructure include street lighting, factory and office building lighting, etc. The equipment in this market generally has a large number of LEDs and must support many light strings. Among them, high-brightness LEDs are also quite common, and these applications are quite Requires remote connection and highly intelligent controller.

The simplest LED lighting system uses LED drivers. These fixed-function devices can directly control the LED, and the cost is quite low. Generally speaking, these devices can achieve good energy efficiency and do not require software programming. In the worst case, the developer must perform multiple calculations, select the required driver, or determine the configuration values a€?a€?of the circuit board components.

Although the LED driver can be used directly, it is not flexible enough for more advanced systems. To support different types of LEDs (such as high wattage or different colors), or different LED string configurations, different solutions may be required. In fact, any change in the system (such as the number of LEDs and the number of light strings) may cause the driver to change accordingly. Therefore, most lighting products supplied by original equipment manufacturers (OEMs) may require unique analog drivers. For large series of products, this will increase the number of OEM or supplier inventory items, which may result in reduced economic scale or increased equipment costs.

On the other hand, intelligent controllers allow developers to build more flexible lighting systems. In the MCU system, the programming code can be set to support various LEDs, unique power level requirements, different light string lengths, and different numbers of light strings without having to change the hardware significantly. The system can also be designed to automatically detect which LEDs need to be driven. The programmable features of the MCU system can also achieve advanced dimming and sequencing functions, providing more advanced lighting scene control and automated lighting brightness.

Flexible digital control allows OEMs to design a single controller that can control multiple products. Because the controller IP can be reused, it can also greatly reduce design investment; the flexible controller can also reduce the number of devices in inventory, and at the same time reduce the overall system cost through greater economies of scale.

Contribute to the integration of digital control of intelligent LED lighting

The basic architecture of an intelligent LED lighting system consists of three main stages, namely power conversion, LED control and communication (Figure 1). The power conversion stage will deliver the correct voltage and current to the LED. First, the AC-DC rectification, then the power factor correction (PFC) phase, and finally one or more parallel DC-DC (DC-DC) conversion phases. To provide effective power conversion, it is necessary to control these conversion stages accurately and flexibly.

Each major stage requires an intelligent controller to maintain efficiency and function. When using fixed-function analogies, individual PFC, DC-DC, LED, and communication controllers may be required. However, when using dedicated power electronics MCUs, the cost of components for lamp power supply can be reduced through a high degree of integration. With sufficient peripherals and communication ports optimized for efficiency and power, a single MCU can control the potential of the three major components of the lighting system power level, LED lighting control and communication. Through the digital integration function of the MCU, the lighting system can reduce many unnecessary components, and at the same time use the central programmable platform to coordinate and control the three main stages of the intelligent lighting system.

Digital power control can also improve the conversion efficiency of dynamic systems. Although the efficiency of LEDs is higher than that of traditional lighting equipment, the operation and energy costs are relatively reduced, but not all LED systems are identical. When dimming, changing the color output or adjusting the brightness output in any way, digital power control can make the power level of the LED lighting system achieve higher efficiency. Also in the case of fixed lighting, the MCU can also improve operational performance through more advanced power stage design. This increase in efficiency is quite attractive to the end user, and it is worth highlighting the difference for two LED systems that are otherwise identical.

For example, suppose a city plans to replace two thousand street lights. When comparing the two models, the efficiency reaches 10% difference (Figure 2). It is worth noting that the system input power for high-efficiency systems is 178 watts (W), while low-efficiency systems require 200 watts to achieve the same 160-watt lighting output. This is equivalent to a 10% annual energy cost savings. The energy efficiency calculation of the power supply alone is equivalent to a savings of $ 33,726, which is much higher than the cost savings of LED systems. 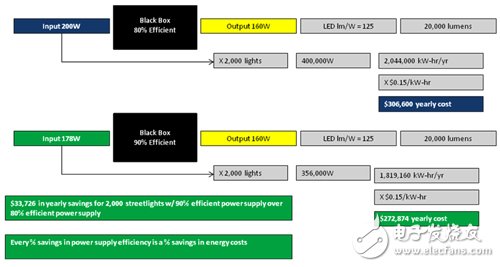 Figure 2 The digital control of the power supply can achieve higher conversion efficiency than the analog system, and the cost savings are higher than LED technology. In this example, a 10% difference in efficiency is equivalent to a 10% annual energy cost savings. Calculating the energy efficiency of the power supply alone is equivalent to a savings of $ 33,726. This efficiency is quite attractive to end users, and it is a key difference for two LED systems that are the same in other parts.