introduction
With the extensive promotion and application of modern high-tech, the urban traffic signal control system presents two major development trends:
(1) changes in the control concept;
(2) Application of artificial intelligence technology.
The intelligent traffic signal control machine is mainly used in those places where the traffic volume at the intersection of the city is large, the traffic flow conflicts and complex intersections and ramps, and the traffic flow direction on some road sections to improve the traffic environment. The purpose of managing and diverting traffic is to adjust, control and guide traffic flow on the road through traffic signals to maintain traffic order, ensure safe traffic and reduce traffic accidents.

1 Traffic Signal Control System Overview The intelligent traffic controller is the executive of the traffic control algorithm. The controller host hardware adopts a modular design that can be tailored. The software is written in C language with good portability. The main function is to realize the automatic control of intersection traffic lights with the single chip as the core. The main functions are automatic multi-time timing control. Semi-automatic control, manual commutation, additional left turn green light, sidewalk traffic lights, etc.

2 Traffic signal controller hardware design
2.1 The traffic signal hardware as a whole can be seen from the hardware overall frame diagram of the traffic signal machine shown in Figure 1 and Figure 2 and the core circuit overall framework. The core circuit board is mainly based on single-chip microcomputer, including clock module and storage module. , keyboard input module, anti-crash module, scheme control display circuit module, lamp color display circuit module, time display module. The above modules are briefly described below. 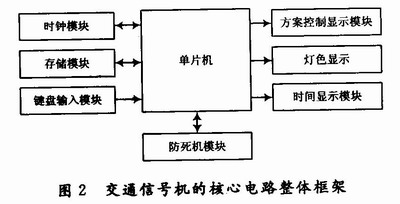 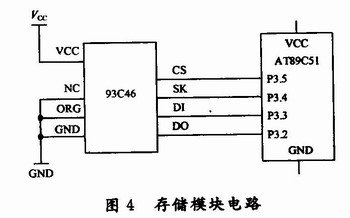 It can be seen from the memory module circuit of Figure 4 that the single-chip AT89C51 uses the P3.5 port to make the chip select signal of the 93C46 chip valid, the clock communication through the P3.4 port, and the data transmission using P3.3 and P3.2. Realize the storage of the information of the timesheet.
2.4 Key circuit design The panel design requires a total of 9 buttons. It uses the time division multiplexing of the P0 port of the single chip microcomputer to solve the connection between 8 buttons and the single chip microcomputer. The remaining one button is connected to the P1 port separately. The 74LS244 chip and the 74LS139 chip are used in the circuit design, and the wiring diagram is shown in Figure 5. 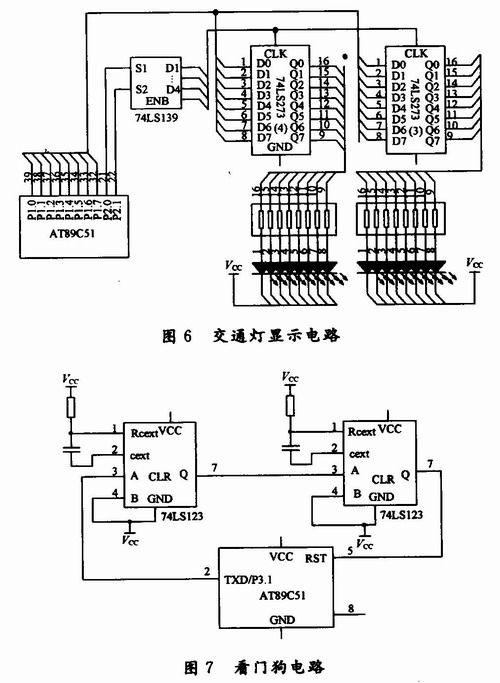 2.6 Anti-Crash Circuit In the traffic signal control system, in order to prevent the "dead" phenomenon, the system has an automatic recovery capability, in which the anti-crash system, the so-called "watchdog", is set up. The basic wiring diagram is shown in Figure 7. Show.