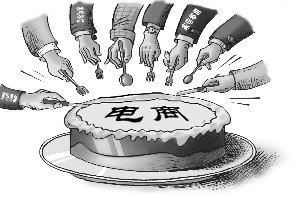 a€?When can we shop online in the big cities, we can pick the express delivery and enjoy low postage rates in the same city, but we can get it back on the same day and return quickly?a€? Ms. Li, who lives in Dali, Yunnan Province, often uttered such a sigh. It is not difficult to find that in the fourth- and fifth-tier cities and rural areas where the variety and logistics of goods are relatively poor, people are more willing to shop through e-commerce channels.

At present, the domestic e-commerce landscape has not yet settled, and competition will become even more intense in the coming years. However, e-commerce companies have already cracked down on the first-tier cities. Penetrating into the second, third and rural markets has become the tacit choice for home appliance manufacturers. At the same time, online shopping trust and logistics in the second, third and rural markets are also constrained by factors such as Gradually highlighted. How to expand this emerging market is a common problem faced by e-commerce amnesty.

In fact, as early as last March, Cao Junbo, president and chief analyst of the Airy Research Institute made it clear that a€?in the future, the scale of e-commerce will increase in the second and third-tier cities.a€? He pointed out that since the beginning of last year, the domestic online shopping market has entered a mature period from high-speed growth, and in the next three years, China's online retail transaction growth rate is between 25% and 30%, which is significantly lower than the 100% growth rate in 2007-2009. .

However, the market for e-commerce in China is still expanding. E-commerce boss Alibaba, Jingdong, who has continuously received financing to expand the market, and Suning, a traditional retailer, continue to invest heavily in e-commerce.

It is worth noting that the penetration rate of Chinese netizens is still far below the developed countries such as the United States. As of the end of December of last year, Chinaa€?s Internet penetration rate was 42.1%, an increase of only 3.8 percentage points from the end of 2011. According to the 2012 a€?Consumer and Technologya€? report released by Forrester Research, a US market research company, the proportion of U.S. adults who use the Internet daily is 84%, which is 6 percentage points higher than the same period in 2011.

In fact, according to Cao Junbo, the gap between the penetration rates of the Internet in China and the United States is providing domestic e-commerce companies with room for development. Where will the increase be obtained by enterprises? Cao Junbo believes that the answer to this question is the second and third tier cities.

According to the classification of Chinese cities, domestic first-tier cities refer to Beijing, Shanghai, Guangzhou, Shenzhen, and Tianjin. The second-tier cities are provincial capital cities, regional center cities, sub-provincial cities, and important economic development cities, including 43 in Nanjing, Chongqing, Hangzhou, Qingdao, Jinan, Taiyuan, Yantai, Zibo, and Baotou, while the third-tier cities include Yinchuan, Lhasa, Baoding, Baoji, Qiqihar, Benxi, Huai'an, Xiangtan, Dali and other 110 low-developed cities. The four- and five-tier cities are all but the above cities.

The market for e-commerce virgin lands has grown tremendously. In fact, the bud of e-commerce has rapidly expanded in second and third-tier cities. Ms. Pang revealed that after registering as a Taobao user in 2008, her new clothes purchased almost every time came from the Internet. "Although there are many malls in Baotou, many brands and styles are still not available on the market. Even if there are some new brands in the mall, discounts will still be much smaller than in big cities." Miss Pang complained to reporters. But it's not the same on the internet, clothes bought online are rarely jerseys, and the price is much cheaper."

Cao Junbo believes that a€?in the fast-growing stage of e-commerce, the fastest harvest in the first ten years of online shopping in China is in first-tier cities, coastal cities, and economically developed regions. In recent years, Xinjiang, Shaanxi, Gansu, Liaoning and Inner Mongolia provinces have purchased online. The increase in the growth rate of orders is obvious. In the future, the increase in the scale of e-commerce education will shift to the second and third-tier cities.

Prior to this, Alipaya€?s chief business intelligence officer Che Pinjue once said, a€?According to some data, the growth of new users of e-commerce in big cities has stagnated, and in the future more will rely on the growth of new users in three-to-four cities. And, three People in the fourth-tier cities who are willing to buy online are not bad in their purchasing power, even higher than those in big cities."

The data shows that along with the development trend of the Internet in China, in addition to the first-line cities where online shopping is already very mature, the third- and fourth-tier cities such as Nantong are extremely active and the daily transaction volume exceeds 120 million yuan. The online shopping in the central and western regions and rural areas has risen suddenly and has been particularly evident in Gansu, Xinjiang, Shanxi, and Qinghai. In Xinjiang and Gansu, the daily transaction volume was close to 270 million yuan and 190 million yuan respectively. In the past, the material and cultural life in these areas was relatively monotonous. However, with the popularity of the Internet, their interest in new things was far greater than that of residents in large cities. People's lifestyles and needs in the third and fourth line areas represent the mainstream of the domestic market. People in the industry believe that through Tmall's "Double 11 Online Shopping Carnival", it can be seen that the outbreak of spending power in the third and fourth tier cities will become the focus of the next wave of online shopping.

a€?Going to the countrysidea€? has become a giant development priority a€?We are very optimistic about the development of third- and fourth-tier cities. The potential of third- and fourth-tier cities and rural markets is huge. For e-commerce companies, it means more room for development.a€? Jingdong Mall clearly The reporter stated that he has a positive attitude toward the a€?E-commerce to the countrysidea€? strategy.

According to Jingdong, the main sources of sales are still concentrated in first and second-tier cities, but the growth of third and fourth-tier cities is very fast. They believe that the spending power of third- and fourth-tier cities is also growing at a rapid rate, and the demand for online shopping from their consumer groups is also rapidly expanding. With the popularization of online shopping in third-tier cities and rural areas, these regions will become the focus of future e-commerce development. one.

Similar to Jingdong Mall, the development of small and medium-sized cities will be focused on domestic e-commerce platforms such as Suning.com and Dangdang.com. The Dangdang official told reporters that they expect to add more than 500 logistics transit stations in second-tier and third-tier cities to respond to orders from local Internet users.

At the same time, Sun Weimin, vice chairman of Suning Yunshang Group Co., Ltd., also told reporters bluntly: a€?In the first and second tier markets, we are upgrading and renovating our storefronts and optimizing our structure as a superstore and flagship store as a major direction. Channels in the third and fourth tier markets Further sinking is also a very important measure for our development this year." a€?This year, in addition to consolidating and ensuring first- and second-tier market advantages, the third-, fourth-tier and rural markets will be one of the main directions for Suning's Yispower.a€? Li Bin, Assistant to the President of Suning Yunshang Group Co., Ltd., added.

According to reports, the Tencent e-commerce company, aware of the potential of small and medium-sized cities, quickly launched its operations and launched its own Yixun Chongqing Operations Center at the end of October last year. Yi Guangwang CEO Bu Guangqi bluntly stated that in the next few years, Yi Xun will invest more than 1 billion yuan in the southwest market.

In addition to the vertical laying of logistics services on their own, e-commerce companies are also trying to push forward cooperation with the industries of express delivery and retailing. It is understood that Alibaba Group plans to join hands with industry enterprises, capital, and financial institutions to invest an initial investment of 100 billion yuan to build a smart logistics network. The main task of the company is to strive to establish a network capable of supporting an average of 30 billion yuan per day in 8-10 years. The intelligent logistics backbone network of retail sales supports the growth of tens of millions of new-type enterprises, and ultimately enables delivery in any region of China within 24 hours.

We can be contacted for customized packaging solutions. Besides the standard packs, we can sort items in desired quantity and pack them accordingly. Our packaging is premium. We have developed several offline as well as online options for the convenience of clients to ensure faster trade. We offer a wide range of the super durable Computer Cables with a strong PVC covering.