The RS-485 bus is based on balanced transmission and differential reception, has strong anti-common mode interference capability, and is widely used in the field of remote wired digital communications. But it also has some shortcomings, such as a node failure will cause the entire bus to paralyze, can not star wiring. Adding an RS-485 hub on the bus can make up for these defects, while extending the communication distance.

This article introduces the design of a four-channel RS-485 hub. This hub has all branches isolated, zero delay automatic transceiver conversion, fault branch automatically cut off and alarm, automatic access after fault recovery and anti-lightning wave Surge protection and other functions.

The RS-485 hub uses the master 485 chip to convert the differential signal on the host bus to a TTL level, and then distributes it to the slave 485 chips of other branches by broadcast, and then converts the slave chip into a differential signal and sends it to each branch bus. on. Figure 1 is the application scheme of the four-way hub. The left side of the figure is connected to the upper computer of the RS-485 bus, and the right side is connected to the lower computers of each branch.

As can be seen from Figure 1, the RS-485 hub plays the role of the repeater extending the distance and expanding the number of terminals. For a four-way hub, its four branch buses can be wired in a serial manner, which is equivalent to dividing the original set of buses into four groups in a star-shaped manner, which solves the limitations of wiring. In addition, when one of the nodes fails and the bus is short-circuited, it will only affect the branch bus where it is located, but not the other three. 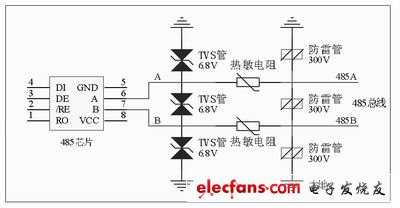 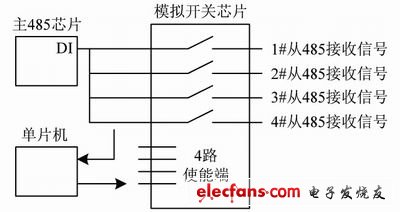 Referring to the working principle of Fig. 1, the design focus of each module is as follows.

In consideration of isolation protection and anti-interference, the five 485 chips are powered by a 5V isolated power module to isolate the master and slave circuits from each other.

As shown in Figure 3, the data input terminal DI of the 485 chip is used to control the transceiver control terminal DE / RE through the NOT gate. The role of resistance and capacitance is to compensate for the delay of signal transmission between DI and DE.

YJVFT series mine explosion-proof and intrinsically safe high-voltage VFD Motor is a highly integrated product of motor and variable frequency integrated machine. The Inverter Motor is applicable to belt conveyors, transfer machines, scraper conveyors, emulsion pumping stations and other coal mines that match the motor and the size of the connection. The Integral Drive Systems can realize the device's heavy-duty soft start, dynamic speed control and other functions.