The schematic diagram of the experimental apparatus and the observation screen of the subject are shown in Fig. 1 and Fig. 2. 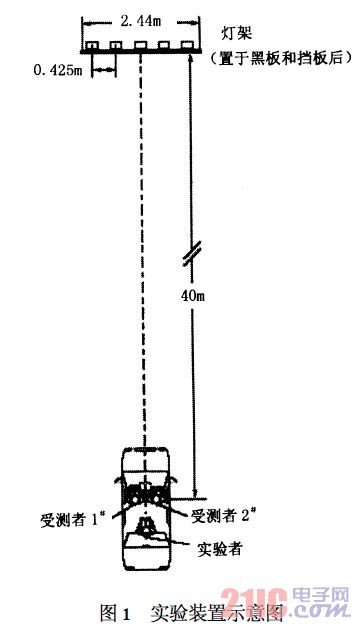 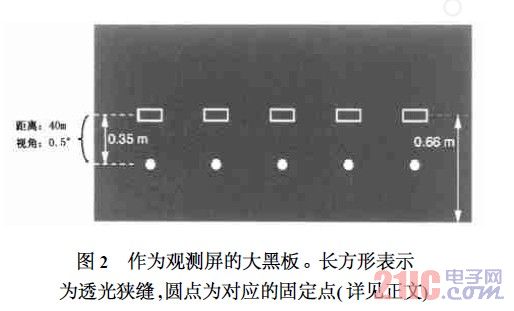 The 5 ??? headlamps use three different light sourcesa€”halogen tungsten lamps, HIDs, and LEDsa€”all of which are optically reflective. Three types of LED headlights (4000K, 4800K, 6600K) with different light colors but the same physical size and structure are used. Each xenon lamp was adjusted to produce 1 lx illumination at the subject's eye position.

There are 5 slits on the observation screen, and the baffle of any slit is taken up, and the observer can see the corresponding lamp through the slit. Each slit is 15 cm wide and 7 cm high. The slit is not visible to the observer when the slit is closed, and the slit shown in Fig. 2 is for illustrative purposes only. Before the test light is turned on, the subject can only see a large blackboard with some fixed white dots through the illumination of the low beam of the vehicle.

The first two illuminances are obtained by placing a neutral filter in front of the lamp (50% and 25% transmittance, respectively), while the highest illumination environment does not require any filters.

All lights are connected to the power supply and manually controlled as needed. The baffle in front of each lamp blocks the slit in front of the lamp so that the lamp is not immediately visible to the subject after it is illuminated. In order to reduce the heat in the experiment, the LED light source is only lit before use, and is turned off immediately after use. In order to maintain a stable color temperature in the experiment, the tungsten halogen lamp and the HID lamp were always lit (about 45 minutes) throughout the process.

The experiment took place on a rainless autumn night. The tungsten halogen lamp low beam of the subject's vehicle is always open throughout the process and is aimed at the target. The ambient illuminance is measured by the vertical illuminance of the subject's eye position, and is measured once at the beginning and end of each group of experiments. The average illuminance is 0120lx, with a minimum of 0116lx and a maximum of 0127lx.

Each age group consists of 3 men and 3 women. All subjects have a driver's license.

Subjects were tested in pairs and each group participated in an independent experimental course consisting of 45 tests. These tests were divided into 3 groups of 15 times each (5 lamps with 3 illuminations). After each test start, light up and maintain for 3 s, and the order of appearance of each lamp in each group is randomly determined.

The first set of 15 tests was used as an exercise to familiarize the subjects with the tasks they were trying to accomplish. However, the subjects did not know that they were practicing, and it was not clear that the experiments they conducted were divided into three independent (repeated) tests. (Only the last two sets of experiments were recorded and analyzed, hereinafter they will be referred to as the first and second groups.) For each experiment, the subject was prompted to observe a fixed point (see Figure 2), each fixed point. 015?° (40m away) below the center of the corresponding lamp.

After balancing the age and gender of the subject, the LED light source was placed in three positions in the middle, and the tungsten halogen lamp and HID were placed on both sides.

As previously speculated, the effect of illuminance is significant on the data, F(2,20)=10317, p=010001, and the uncomfortable glare is monotonous with illuminance (see Table 1).

In the analysis, we first use the blue cone cell spectral light efficiency function to weight the spectral energy distribution of each light source, calculate the "blue light flux", and compare the result with the discomfort glare level. As shown in Fig. 3, we see that the calculation result of the blue cone efficiency function has a linear relationship with the discomfort glare level, and the correlation coefficient is 0.99. 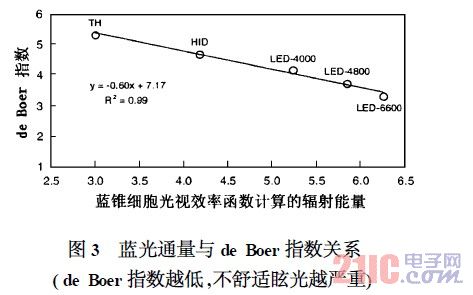 As speculated in our previous research report (Sivak et al., 2003), we found that: (1) LED headlamps produce more uncomfortable glare than tungsten halogen lamps and HID lamps in relatively bluer conditions (2) The blue component of the headlamp under test directly affects uncomfortable glare. In addition, our findings are in agreement with the experimental data under the same conditions in JARl (2004).

One of the most interesting findings of this experiment is that the blue light flux calculated using the blue cone spectral light efficiency function is a good predictor of glare discomfort. This relationship can only be temporarily approved until the experiment is verified with more headlamp spectral distribution.

There have been some tentative studies showing that the more blue light components of a light source, the better the detection of peripheral visual targets under night driving or similar lighting conditions. In the future, we should further try to better quantify the wavelength function of glare and detection, so that we can better integrate the influence of these two contradictory factors when choosing the pre-light color.

This experiment evaluated the effect of the blue component of the headlamp on the generation of discomfort glare, with the aim of providing guidance on the relevant spectral components to reduce driver dissatisfaction. The experiment tested three types of LED light sources (color temperature 4000K, 4800K, 6600K), as well as tungsten halogen lamps and HID automotive headlamps. The subject sat in the stationary car and evaluated the uncomfortable glare generated by the light source at 0.25 lx, 0.5 lx, and 1 lx illumination.

As predicted by our previous research, we found that LED headlamps produce more discomfort glare than tungsten halogen lamps and HID headlamps in relatively bluer conditions. This effect may be mainly due to the color of the LED source and not other characteristics, which may have different or opposite results for other sources. The data from this study indicate that the level of discomfort glare is directly proportional to the blue component of the spectrum.

Therefore, if the relationship can be further confirmed in future research, the blue component will be used as an inspiring indicator in selecting the car's frontlight color to reduce the driver's dissatisfaction with glare.

The operation of Automatic Guided Vehicles (AGVs) requires high utilization of these vehicles in order to achieve an optimum of profitability. Often, recharge of the batteries which are required for the drive of the AGVs, presents a problem.

The development of powerful batteries, which allow for quick recharge within seconds, enables the integration of charging contacts into the production cycle without removing the AGVs from the production process.

Battery charging stations may be installed anywhere within the system where the production process allows the AGV to stop (staging areas, turn arounds, loading stops etc.).