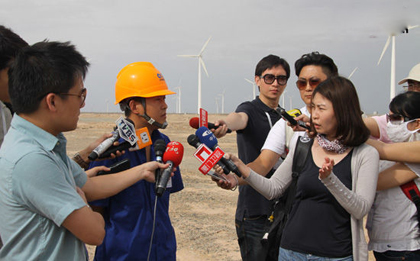 Guazhou County, Jiuquan City is located at the west end of the Hexi Corridor in Gansu Province, connecting Yumen City, the oil city in the east, and Dunhuang City, a tourist city in the west. It is adjacent to the Subei Mongolian Autonomous County in the north and south, and is connected to Hami City in Xinjiang in the northwest. The traffic hub, the merchant town of Ancient Silk Road. Guazhou is known as a€?the capital of wind power in the worlda€? and its domestic wind energy resources are extremely rich. When the interview group bus journeyed in the county seat of Guazhou, the reporters felt that the wind power of Guazhou was strong, and the willows on both sides of the road were shaved and a€?shadows spread out.a€? The newly planted trees were almost uprooted. Local officials said that there was a saying in Guazhou describing the windy situation in Guazhou. a€?It only scratches the wind in one year and scrapes it from spring to winter.a€? Because of this, Guazhou is a region where natural disasters are more serious.

In the turmoil of the hurricane, the bus departed from the county and drove on the deserted Gobi Desert. Outside the window of the car, the strong winds began to rise, and the loess was flying and the fine stones piercing the air. It was gray and blurred, and it was impossible to discern things. Many reporters from the southeastern mainland and Taiwan had seen this battle with their own eyes and were amazed.

Finally arrived in Guazhou wind power base - Gansu Jiuquan Wind Power Co., Ltd., just as a government building, the company's relevant leaders on the already prepared local production of watermelons and melons, to comfort the guests from afar. The original Guazhou County is known as the "hometown of Chinese honeydew melons." The fruits produced in the area are long-lived and have high sugar content, so they are full of sweetness. While the members of the interviewing team tasted fruits, the companya€?s relevant leaders briefed the members of the group about the companya€?s basic situation.

Under the guidance of the companya€?s leadership, the cross-strait reportersa€? interview group came to the production operation room of Jiuquan Wind Power Company. In the operation room, the two companya€?s employees are working attentively on computers. Zhang Liang, assistant manager of production department of Gansu Jiuquan Wind Power Co., Ltd., briefed the leaders of the delegation and the cross-straits reporters on the company's basic wind power production. Many reporters were very interested in wind power issues and asked questions. Zhang Liang gave detailed explanations.

The original Jiuquan area had sufficient electricity, and most of the electricity produced by the company was exported to foreign countries. Wind energy itself is energy without cost. Therefore, wind power investment costs are recovered quickly, which greatly stimulates local economic development.

The leaders of the company wanted to lead the members of the delegation to the wind power base for field experience. They did not expect that they had just left the office building. Zhang Liang was once again surrounded by reporters. The reporters raised more specific issues, including the cost of each windmill, the installed capacity, and the companya€?s How many of the wind power generators, etc., journalists took all the stops, photographed, photographed, recorded, and even took notes, and Zhang Liang answered all kinds of questions to reporters.

Finally came to the windmill base outside the company. On the Gobi, countless white windmills were turning in the wind. Actually on the way to the company, the members of the interview group had already seen a lot of such windmills. The reporter walked on the Gobi and was accompanied by white windmills. They were very excited and they took pictures with the windmills. Zhang Liang appeared at the windmill base and was once again trapped by Taiwanese reporters. This time it was mainly a reporter from several TV stations in Taiwan. They seized the opportunity to interview Zhang Liang for the last large-scale outdoor video interview. Zhang Liang did not Unpleased, but pleasantly accepted interviews with Taiwan media reporters for a long time video.

Zhang Liang told the Director-General of the Taiwan Affairs Office, Yang Yi, about the company's wind energy production. The endless energy of the natural world is increasingly exerting its tremendous influence on the land of Guazhou. In recent years, Taiwan is also actively developing emerging industries such as wind power to solve the increasingly severe power shortage problem. The reporter hopes that the wind energy industry on both sides of the strait will actively cooperate with each other and innovate in technology so as to benefit the compatriots on both sides of the Taiwan Strait and benefit future generations.

Home Heater means for heating equipment. The heater can be divided into several types due to the different of heating principle, heating channels, thermal conductivity media and scope. Our factory produce and sale Gas Heater, electric heater, Kerosene Heater. The heater is easy to remove and heating, are widely used in homes and public places. Our gas heater use imported heat-resistant fire net, net life more than 10years; The heater use pure copper valve core, pure copper gas tube, pure copper spay nozzle, durable and no leakage; Our heater have dual heating function with flame control lever, heater and cooker 2 in 1; The heater use steel body, all steel thickness more than 0.6mm, sturdy and durable; The heater`s piezoelectric ignition switch, life can be over 30000 times.

4. moderately dry your room, purifying the environment, effectively inhibit the growth of bacteria.

8. piezoelectric ignition switch, life can be over 30000 times.

9. fire or gas can be turned up and down freely.